Warning: count(): Parameter must be an array or an object that implements Countable in /homepages/21/d218996051/htdocs/ptbacademy/wordpress/wp-includes/post-template.php on line 284 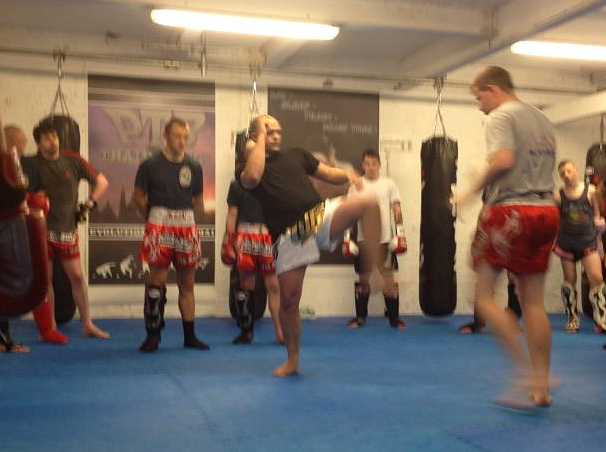 Our seminars are open to anyone and are useful to all Muay Thai practitioners from beginners to veterans.

Kieran and Vinnie with the PTB Academy students.

Three-time Muay Thai world champion gave a two-hour clinch clinic at PTB Academy in June 2013. This seminar broke down several techniques for getting into, and using, the Muay Thai clinch as Keiran shared his vast experience with a gym full of students while assisted by veteran K1 and Enfusion commentator, and top Muay Thai coach, Vinnie Shoreman.

Arjarn Tony Moore of the Sitsiam Camp is the UK’s foremost authority on Muay Thai and for his third seminar at PTB, he introduced the students to the fighting art of Muay Boran, the precursor to Muay Thai.

As well as teaching and demonstrating phenomenal striking techniques, Arjarn Tony also delved into the history and philosophy of this historic and influential martial art.

Tony’s second seminar at PTB focused on the weapons-based martial art of Krabi Krabong.  Arjarn Tony explained the history of the art and demonstrated various defensive and attacking techniques using the krabi (the single-bladed sword).

Luckily Tony brought his supply of wooden training swords so everyone was safe and had a fun three hours learning how to properly wield a weapon against single and multiple opponents.

Tony’s first seminar at PTB Academy was in May 2012 and he taught students three hours of traditional Muay Thai.

Yang Sarm Kum (three stride movement) – footwork drill for being able to move in all directions.

Nine directions of striking – practicing striking from all directions, emphasising the advantage that Muay Thai has over western boxing. Included unorthodox strikes such as ‘Rama Fires The Arrow’ (right cross with a step back) and the jumping (“Superman”) punch

For top level strength and conditioning, we are opening Dockside Fitness upstairs from the PTB Academy. Check out the website for more information.